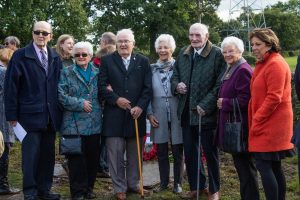 A Wythall business with a personal connection to a World War Two tragedy has been leading efforts to create a lasting memorial to the young servicemen who lost their lives on its land nearly 80 years ago.

The unveiling will take place on October 2nd at Highfield Farm, marking an event forever etched in the minds of those who experienced it.

It’s early in the morning of January 9th, 1942 and a Wellington bomber is limping home following a daring raid over Nazi-occupied France. On board are six crew. Engine failure forces the pilot to think quickly and he chooses RAF Wythall for an emergency landing, possibly unaware that the base, home to a barrage balloon command, has no runway

He steers past the village, narrowly avoids power cables and crash lands in a field, where his wing strikes an oak tree. The plane spins violently, breaks up and is engulfed in flames.

The lights in Highfield Farm are already on. Ten year old schoolboy John Nash has witnessed the crash and runs to a terrible scene. Two Canadian airmen are pulling their friends from the burning wreckage. Three Englishmen lie dead or dying. A fourth from New Zealand will survive two days before succumbing to his injuries.

77 years later, John Nash is now the owner of Highfield Farm and still recalls those events clearly. His son David runs a business from the site – Busters Group, a successful environmental services company with an armed services covenant for recognition of its support for our armed forces.

Fittingly, members of the airmen’s families will see the memorial unveiled in October, paying a lasting tribute to the bravery and sacrifice of their loved ones.

Pestbusters Harry has been outstanding with his customer care, expertise, remedy and consistency. Please, could you communicate my gratitude to Pestbusters for the thorough job that Harry has done to date. I am very appreciative.

From the first phone call through to completion was a stress-free process. Really nice guys. Home Assist Customer

I would like to use this opportunity to give our feedback from the organization on a member of your staff team Kenzie.   We were formerly with Pest Control and our account was then handed over to yourself. To be honest, because we had such a good working relationship with that company moving over to your self we had some reservations. However, with Kenzie being our technician, we are extremely happy, as a day nursery you can appreciate having consistency is always important to us. Kenzie is pleasant, courteous and respectful he is always helpful and makes sure he does a thorough job. His service is excellent and we can truly say he sells your company very well and we believe is an asset to you. He is child-friendly and is very aware of health safety within the setting. We trust that our compliment will be passed over to Kenzie. Looking forward to another year of working together. Kind regards Anka Day Nursey

We had Tina on site today conducting our pest control, we usually have Darren. I just wanted to pass on my praise for how polite she was and a pleasure to have working on site. (Darren’s great too by the way!). Kind Regards St Mowens Operations Manager

The Service Speaks For Itself!