How to get rid of wasps

Wasps are one of the more unwelcome sights of the summer – buzzing menacingly around bins, the doors of your home and patio dining tables.

While wasps have an important part to play in nature, they can also be a serious pest owing to their tendency to deliver multiple painful stings. 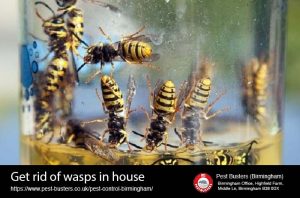 As a result, the sight of wasps buzzing around your home or work premises is very often an unwelcome one – but be prepared as wasp season is due to get underway anytime now.

Summer is officially wasp season with increasing numbers becoming apparent from May onwards. While August and September are usually the height of wasp season, wasps will become established from the very start of the warmer months.

While wasps are excellent helpers in the fight to control plant-damaging insects for families they are certainly unwelcome in numbers.

Plan ahead to avoid problems with wasps

If you are concerned about the number of wasps that you are seeing around your home or business – or have experienced problems in the past and want to avoid a repeat experience now is the time to plan ahead and learn how to get rid of wasps in your house or garden.

The first step in keeping wasps at bay is to remove or cover anything that may actually attract them to your property, including: 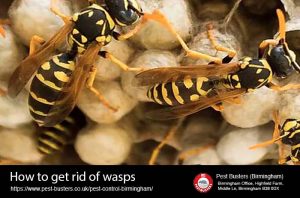 Having taken all the precautions possible, it is important to remain vigilant in looking out for wasps on or around your property.

If you begin to notice an increasing number of wasps there is a chance that there may be a wasps’ nest on your property or near to it.

With an increased presence of wasps be careful not be stung but try to locate where the wasps’ nest is by tracking the movements of the wasps.

On finding a wasps’ nest it is imperative to seek professional advice as, depending on the species of wasp, the nest could contain thousands of wasps, which will present a serious health hazard.

What to do if you find a wasps’ nest

Once you have found a wasps’ nest call in expert help to remove it from your property – it is strongly advised not to take action yourself due to the risk posed.

While wasps’ nests can be dealt with and removed, it is vital to differentiate between wasps and bees, as bees are offered a greater level of protection and should not be moved.

Obviously, the appearance of bees differs to wasp, but their nests are also notably different, having a waxy appearance.

If you spot a bees’ nest on your property you will most likely have to leave it untouched until the season is over and the nest empty. It may be possible to enlist the help of a beekeeper but any action to make the nest safe must be taken by a professional, so it is always advised to call for help.

If you are concerned that you have a wasps’ nest on your property or have discovered a nest, Pest Busters will be able to help. We also offer other pest control services as well.

Contact Pest Busters for help dealing with wasps on your property and keep your family safe throughout the summer.

I was very impressed with Simon Potter, he did a good job and he found him to be very professional.

Your Technician Andie Worrall is very knowledgeable and professional and has also on several occasions gone the ‘extra mile’ on behalf of our clients, who are very appreciative of his efforts.I would imagine it is a tough job so hopefully, some positive feedback might brighten up the day!

I would like to use this opportunity to give our feedback from the organization on a member of your staff team Kenzie.   We were formerly with Pest Control and our account was then handed over to yourself. To be honest, because we had such a good working relationship with that company moving over to your self we had some reservations.However, with Kenzie being our technician, we are extremely happy, as a day nursery you can appreciate having consistency is always important to us. Kenzie is pleasant, courteous and respectful he is always helpful and makes sure he does a thorough job. His service is excellent and we can truly say he sells your company very well and we believe is an asset to you. He is child-friendly and is very aware of health safety within the setting.We trust that our compliment will be passed over to Kenzie. Looking forward to another year of working together.Kind regardsAnka Day Nursey

Pestbusters Harry has been outstanding with his customer care, expertise, remedy and consistency.Please, could you communicate my gratitude to Pestbusters for the thorough job that Harry has done to date.I am very appreciative.

From the first phone call through to completion was a stress-free process. Really nice guys.Home Assist Customer

We had Tina on site today conducting our pest control, we usually have Darren. I just wanted to pass on my praise for how polite she was and a pleasure to have working on site. (Darren’s great too by the way!).Kind RegardsSt MowensOperations Manager