The thought of having 10,000 wasps living on your doorstep is a terrifying prospect. But should wasps choose to make their nest on your property this is the reality some homeowners could face. 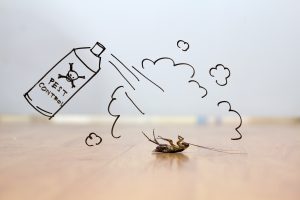 Wasps can make their nests in a number of areas around the home such as cavity walls, lofts, garden sheds and garages.

Starting off small, the queen wasp will soon set to work stripping wood and repurposing it to enlarge her kingdom. These nests can grow to the size of a football – if not larger – accommodating thousands of wasps.

Throughout the summer the number of wasps continues to grow as well as the nest, which is built up by worker wasps which take over from the queen while she concentrates on laying hundreds of eggs every day.

The presence of just one wasp is enough to send some people in to a panic, but what would you do faced with thousands of them? The first thing is keep calm and call for help.

Why do wasps’ nests pose a danger?

Pest control options can take the sting out of your wasp’s nest problem quickly and efficiently by taking a few simple measures, so don’t live in fear of a menace on your doorstep, take action today.

As a rule wasps only sting when they feel threatened, the problem is when they do feel under attack they release a chemical that alerts other wasps to the danger, which then join the attack.

Disturbing a wasps’ nest is particularly hazardous as it will release multitudes of angry wasps. Wasps can sting multiple times and being stung by more than one is certainly an unpleasant experience, the most worrying factor though is the possibility of anaphylaxis from a wasp sting.

Leave getting rid of a wasp’s nest to the experts

For these reasons wasp’s nest removal is best left to the experts. Unlike bees, which are an endangered species, pest control is the best way to tackle a wasps’ nest.

Pest Busters will target the wasps inside the nest, making the area safe once again, and giving you peace of mind that your home – and your children – are safe from the threat of wasps.

Pest Busters have extensive experience of removing wasps’ nests, so don’t leave yourself in danger a moment longer than necessary – contact us today for expert advice.

Pestbusters Harry has been outstanding with his customer care, expertise, remedy and consistency. Please, could you communicate my gratitude to Pestbusters for the thorough job that Harry has done to date. I am very appreciative.

From the first phone call through to completion was a stress-free process. Really nice guys. Home Assist Customer

I would like to use this opportunity to give our feedback from the organization on a member of your staff team Kenzie.   We were formerly with Pest Control and our account was then handed over to yourself. To be honest, because we had such a good working relationship with that company moving over to your self we had some reservations. However, with Kenzie being our technician, we are extremely happy, as a day nursery you can appreciate having consistency is always important to us. Kenzie is pleasant, courteous and respectful he is always helpful and makes sure he does a thorough job. His service is excellent and we can truly say he sells your company very well and we believe is an asset to you. He is child-friendly and is very aware of health safety within the setting. We trust that our compliment will be passed over to Kenzie. Looking forward to another year of working together. Kind regards Anka Day Nursey

We had Tina on site today conducting our pest control, we usually have Darren. I just wanted to pass on my praise for how polite she was and a pleasure to have working on site. (Darren’s great too by the way!). Kind Regards St Mowens Operations Manager

The Service Speaks For Itself!